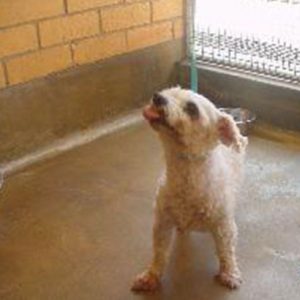 For some reason, one day, I thought our little schnauzer Ernie, might need a doggie mate. Onto the internet, and I fell onto a site called Dogzonline. There it had breeders of everything, and a section called Rescue. The day I clicked on that, was the day our lives changed.

I started to read a story about a dog in Canberra, a cute little old Maltese – who had been thrown over the fence at the Canberra Pound. He was microchipped and his name was “Bludger”. The name upset me so much – that his family thought that of him. His owner, a woman had been contacted and she said she would come and collect him. Being microchipped he would be held for 14 days.

Every day I checked on the site, and every day he was still there. There wasn’t much noise from Rescue about taking him on, he was older and needed a dental, his mouth was really bad.

On day 11 I read a post by a Rescuer about Bludger. He had died overnight in the pen, probably due to the infection in his mouth. That little dog called Bludger, unwanted by his family, died in pain, alone, and had probably done nothing wrong in his life,. He had probably given a lot of love to people, who didn’t deserve the privilege of having him. I could not believe what I was reading. And as the days went on, I read more stories, similar in vein – it was like watching a train smash in slow motion. So began the journey of a woman who had absolutely no idea about Rescue, in her 40’s, with a thought that things should, and needed to be better. Rescued With Love was born shortly after.

I kept the pic of Bludger. And I do not forget him. This is him. He was 11 years old when he died in the pen at a pound in Canberra. And I guess he was the catalyst for the thousands who have been saved over the past decade – and I hope more in the future.