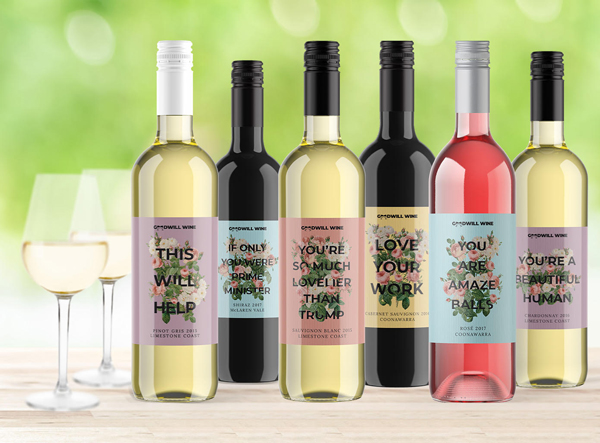 Imagine if something as simple as enjoying a glass of award-winning vegan wine could help animals in need? Well, it turns out that it can thanks to a unique social enterprise called Goodwill Wine.

On the 7th of February 2009 David Laity lost most of what he owned to the Black Saturday Bushfires. He was living in a small hamlet called Chum Creek, located between King Lake and Marysville and was volunteering at an animal shelter around the corner. Like many other houses around the state of Victoria, David’s home was hit by the fires that swept through the area, as was the animal shelter he had been volunteering at.

“My volunteer work was mainly maintenance, helping around the grounds and building enclosures. I didn’t have the time to commit to the hands-on care of the animals which is a round-the-clock job, but I was doing what I could,” David recalls. “Thankfully none of the animals were killed by the fire but it took a monumental effort by fire crews to save them”.

Over the following week, David’s home was hit another 2 times by wildfire and when the fires were eventually put out 3 weeks later, nothing remained.

The Black Saturday Bushfires is Australia’s greatest national disaster, claiming 173 human lives and destroying over 2000 homes. It has been conservatively estimated that over one million wild and domesticated animals died in the initial firestorm.

All of Australia’s aid agencies stepped up as did the public, donating money where they could. The Red Cross Bushfire Appeal raised a record $379 million, much of which was distributed amongst the survivors. David received $15,000 of this. “I was one of the lucky ones.” David said. “I was alive and hadn’t lost immediate family and so I decided to do something with this money that gave back.” David took the $15,000 and set about beginning Goodwill Wine, an online wine business that donates 50% of its profits to the charities of its customer’s choice. Since then Goodwill Wine has donated back over $275,000. 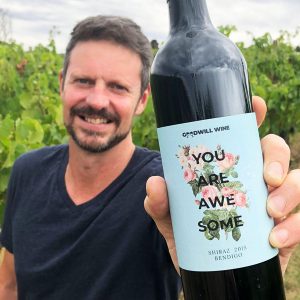 “The early days were pretty tough,” recalls David. “Starting a business is difficult at the best of times, but giving away half of the profits only multiplies the challenges. I couldn’t afford to rent both a warehouse and a home and so I spent most of the first 5 years living in an old derelict coolstore with my wines. I wasn’t meant to be there and so each morning I would roll up my swag and begin work. There were other businesses there too, so for that entire time I had to be the first to work and the last to leave, 7 days a week. I got a lot done.”

This dedication saw the business grow rapidly and soon Goodwill Wine was partnering with over 200 charities. Animals Australia was one of the first to come on board and to date have raised over $30,000 through the sale of vegan wines. This money has funded 3 international animal cruelty investigations, a fact David is really proud of. “I love Animals Australia and I love the people behind the scenes there. Their commitment and the power behind their voice is incredible. Like so many of their supporters there is nothing I wouldn’t do for them, and that my customers and I can play our tiny role in helping them fight for justice for all animals, is a privilege like no other.”

David didn’t initially plan on stocking only vegan wine, but as demand for cruelty free wine grew it seemed like the logical next step. “Over the past 5 years I have only sourced one single wine that wasn’t vegan and so earlier this year I made the commitment never to stock a wine again that has been fined with animal products. I figured if I was raising money to help animals then I had to look after animals in every aspect of my business”.

Besides the money raised for Animals Australia, the impacts Goodwill Wine has achieved for animals has been significant, including raising money for Sea Shepherd and Edgar’s Mission along with many smaller shelters around Australia such as Freedom Hill Sanctuary and Peanuts Funny Farm. When asked what the charities do with the money they receive, David gets excited. “To date we have been able to raise enough money to re-home 80 dogs and 130 cats. We’ve also helped save 9 whales for Sea Shepherd by paying for their fuel during their recent Southern Ocean campaigns. We’ve helped re-home 47 Orangutans for The Orangutan Project and we played a role alongside the Australian Marine Conservation Society in removing plastic bags from all shops in Queensland”.

Earlier this year Goodwill Wine was approached by an international philanthropist who had purchased the wines in the past, loved them and felt David needed help to grow and do more good. He invested in the business, others soon followed and they bought with them some very professional help. Goodwill Wine took on a brand new look and for the first time was able to advertise. No longer relying on word of mouth, the business has grown 300% over the past 4 months and has been able to begin employing from within Australia’s most disadvantaged sectors. “It’s like a dream come true,” said David. “I finally have help and this investment has allowed us to take on 2 long term unemployed people and another employee from the NDIS (National Disability Insurance Scheme), all while tripling our donations to charity.”

It’s been a long road for David but the hard work and sacrifices are beginning to pay off for both Goodwill Wine and all of the charities he supports.

Goodwill Wine stocks only vegan wines and supports many of the charities fighting for animal rights both here in Australia and abroad.

To order Goodwill Wine and support Rescued With Love directly, go to www.goodwillwine.com.au/charities/rescued-with-love